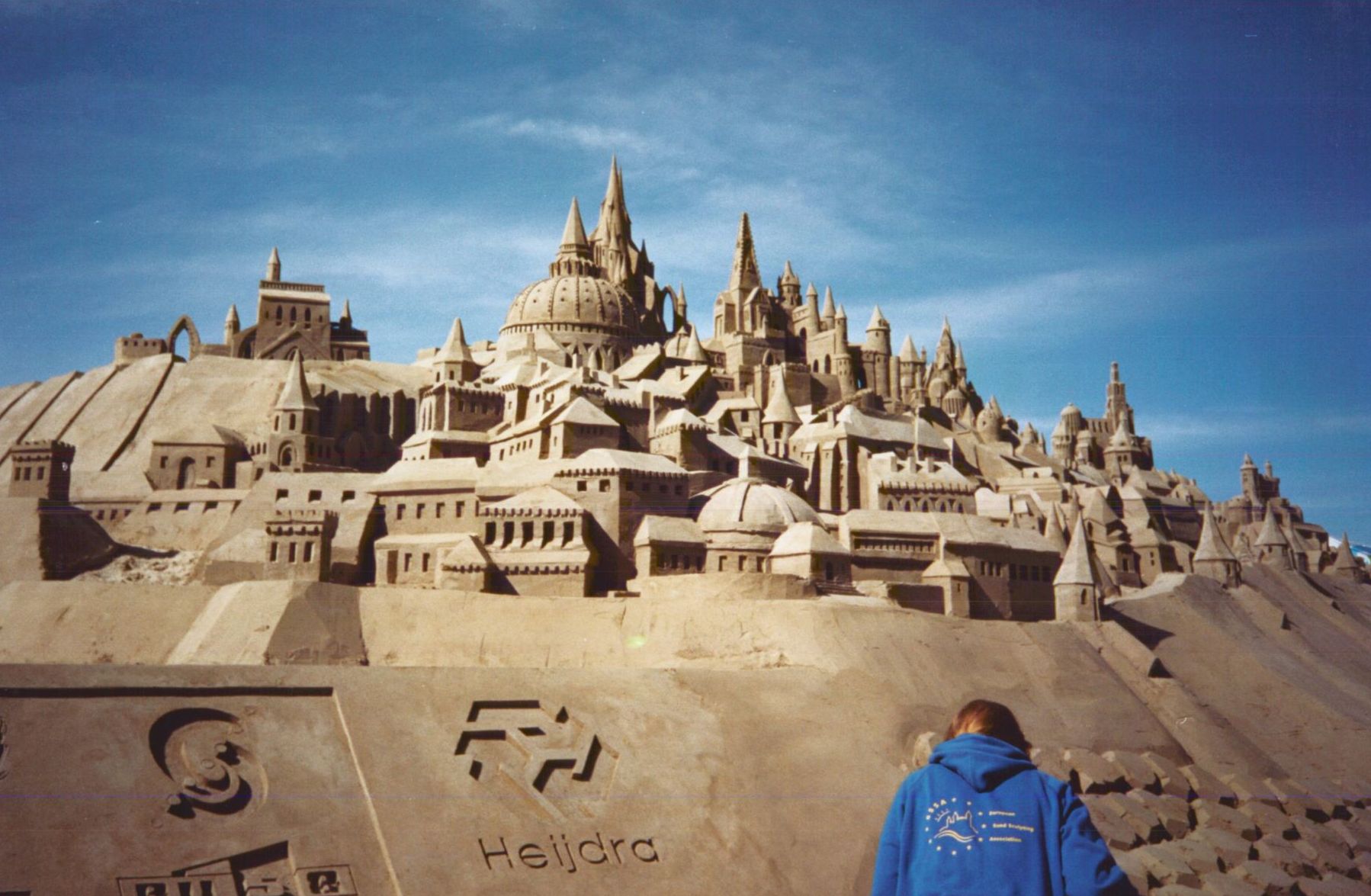 From our archive: Scheveningen 1991 – The Netherlands

The sand sculpting history of the World Sand Sculpting Academy starts in the mid-seventies with founding father Gerry Kirk. At that time Gerry’s profession was carpenter / builder, but not for long. His vision for the future meant a big change in how the art of sand sculpting is recognised today.

Gerry initiated the development of new techniques for building taller sand sculptures. First, it was common practice to use the “volcano method” to compact the sand but there was no stability to create high sculptures. Initially developed by Gary Kinsella, Gerry experimented using round forms, but these seemed to bend uncontrollably. Because of his professional background, Gerry started to create wooden forms to compact the sand and found it successful, only to know wooden forms cannot be too long, otherwise they bend and burst because of the sand pressure.

After having the new method tested locally in Solana Beach, California, Gerry successfully entered various sand sculpting competitions throughout the USA. Using this new compaction technique he and his team were always able to build the tallest sculpture. In the late 70’s there was a very important sand sculpting competition in White Rock, Canada. Gerry entered this competition for 5 consecutive years. The beach there was a tidal flat and the contestants had to construct a sculpture within the tidal range, but due to his new technique Gerry was able to win the competition three times out of five.

The end of the seventies was a period of technical improvement and acquiring extensive knowledge of different types of sand. Gerry learned for example that some sands were not stable enough for big sculptures. The sculptures would slide because of the shape of the grains. Round grains (usually present on beaches) were less stable than sharp-edged grains (river sand). He also learned that sand should be clean because the stability and final result of a sand sculpture is greatly influenced by the presence of twigs and shells.

All in all, it took Gerry and his sand sculpting team about 5 years to explore and develop the compaction method, which is still used to this very day all over the world. 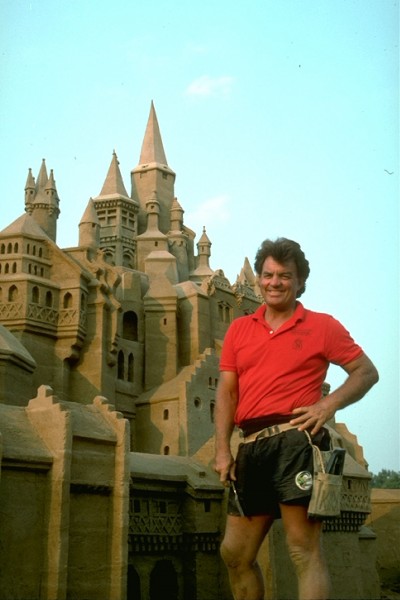 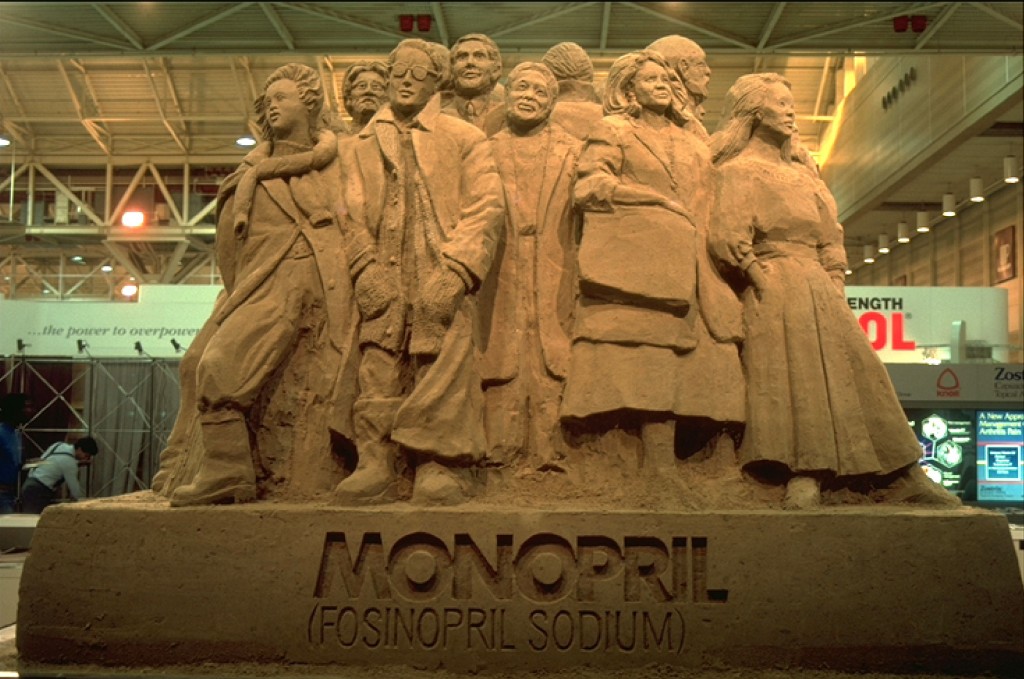 One of the first commercial sand art projects

At the beginning of the 80’s, Gerry was still working full-time in the construction business when he met a hotel owner who wanted a replica in sand of a new extension to his hotel. Gerry successfully made the replica of this new hotel wing, which turned out to be his first commercial job. From then on the San Diego Convention Bureau hired Gerry and his team for an international corporate tourism trade fair, the IT & ME in Chicago. For 4 years during the winter months Gerry undertook many sand sculpture projects for the San Diego Convention Bureau while they attended as many competitions as possible in the summer. They had found a way to have year-round jobs creating sand sculptures for the first time in history.

Gerry created a company which was called Sand Sculptors International (SSI). It was the only existing sand sculpting company in the world at that time, which brought them much success. After the foundation of SSI, others, mostly architects who were part-time sand sculptors, tried to follow his suit. However, most of them didn’t want to take the risk of having to leave their well paid jobs and start a sand sculpting company on a full-time basis. 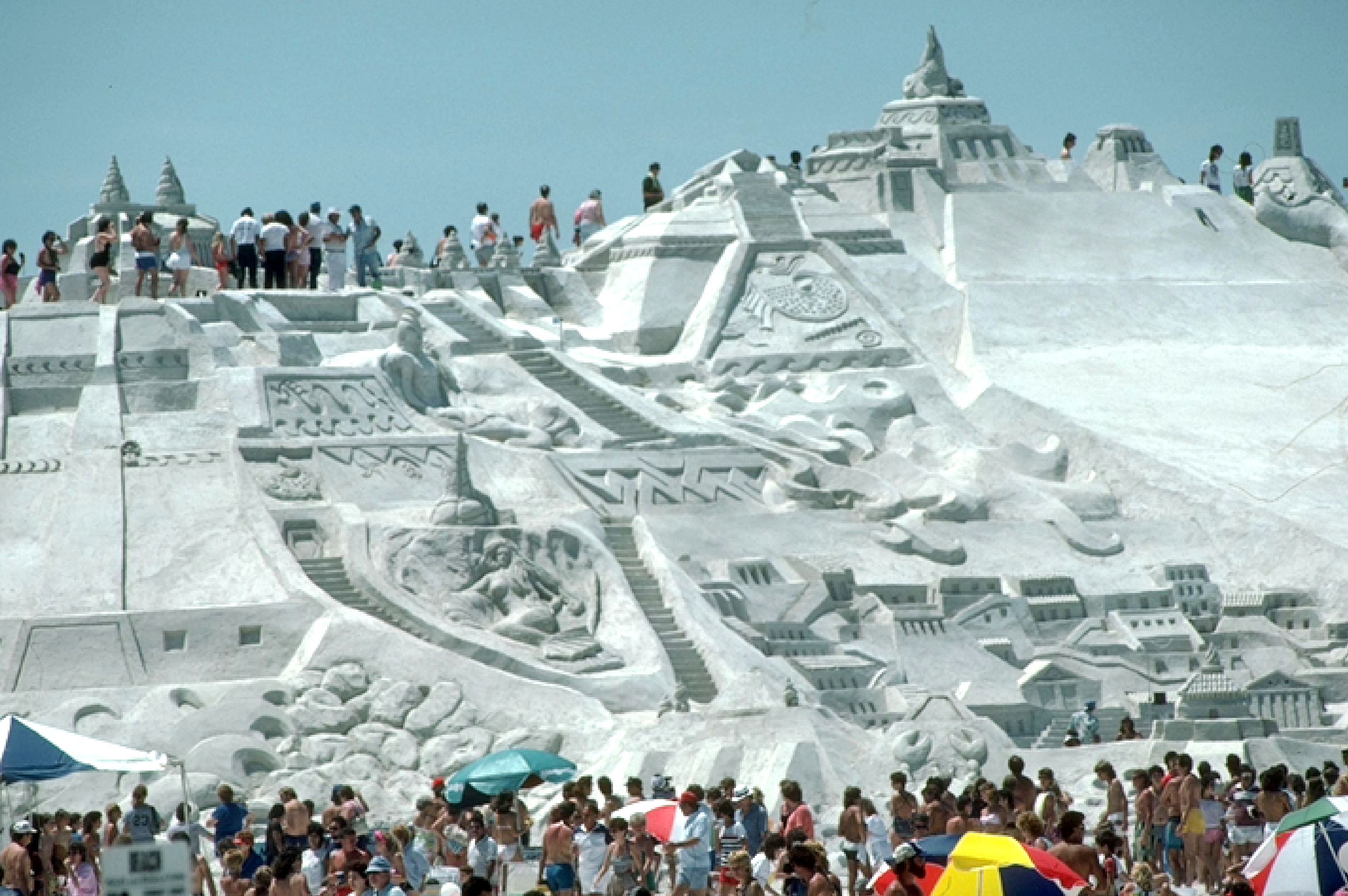 In 1985 Gerry (SSI) was contacted by a beach resort owner on Treasure Island in Florida. They came up with an idea to build a huge sculpture named Blue Beard’s Castle. This immense project lead to worldwide publicity on TV and numerous articles, like 8 pages in the renowned Smithsonian Magazine. This triggered off a whole new series of jobs reaching all over the globe. Within two years the Treasure Island sand sculptures even entered the Guinness Book of Records. 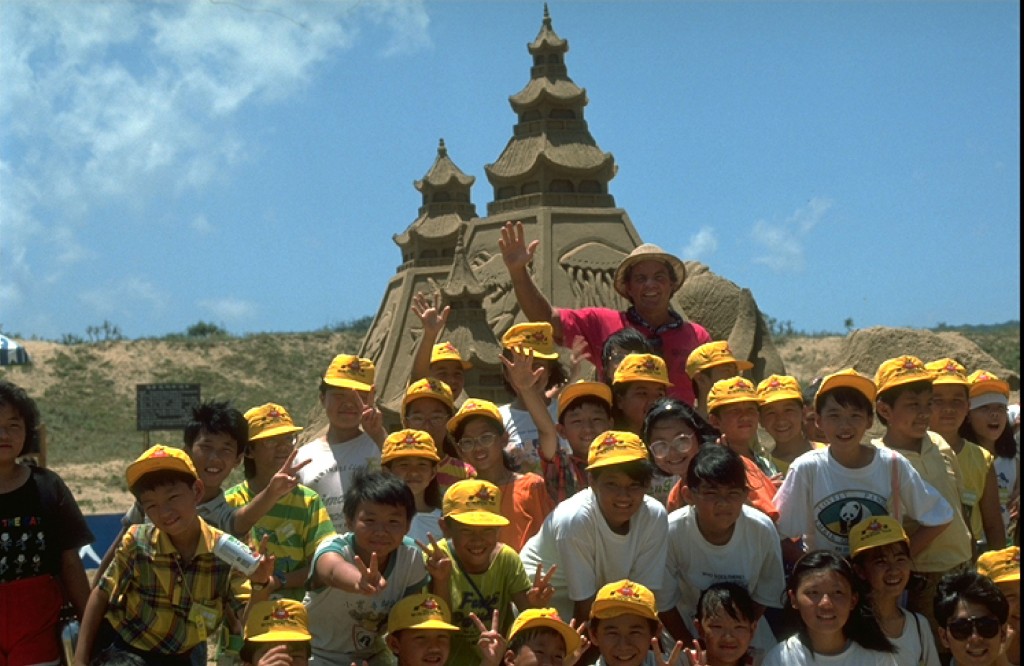 In 1986 and 1987 sand sculptures became more and more popular. Through the article in Smithsonian Magazine, Gerry was approached by a large company in Japan and he was invited to come to Tokyo for a children’s TV show. For 3 years Gerry built a sand sculpture in the children’s department of Isetan department store. An artist, Katsuhiko Chaen, and the mayor of the city of Kaseda, nowadays known as Minamisatsuma, Shioga saw Gerry and his work on TV and invited him to come to Kaseda, on the island of Kyushu in southern Japan.

Kaseda was a life time experience. Together with Gary Kinsella, Gerry build a demonstration castle and taught children the basic techniques. After that, Kaseda wanted a big sculpture. Therefore Gerry took 18 sculptors with him to Kaseda and organised the first big sand sculpture event in Japan. At the same time all kinds of sand sculpting projects were undertaken in the USA, for example in San Diego Zoo, Hollywood and for Disney.

With numerous international projects at that time, Gerry founded the World Sand Sculpting Association in 1990 to promote sand sculpting worldwide. In that same year Gerry met Marcel Elsjan of Wipper from The Hague, The Netherlands, who had the same vision and knew they could bring sand sculpting to a whole new level. Together they began a liaison and introduced the art of sand sculpting as an event form in The Netherlands at the Technical University of Delft. This project created much enthusiasm among students who were trained on the spot and became the first group of Dutch sand sculptors. 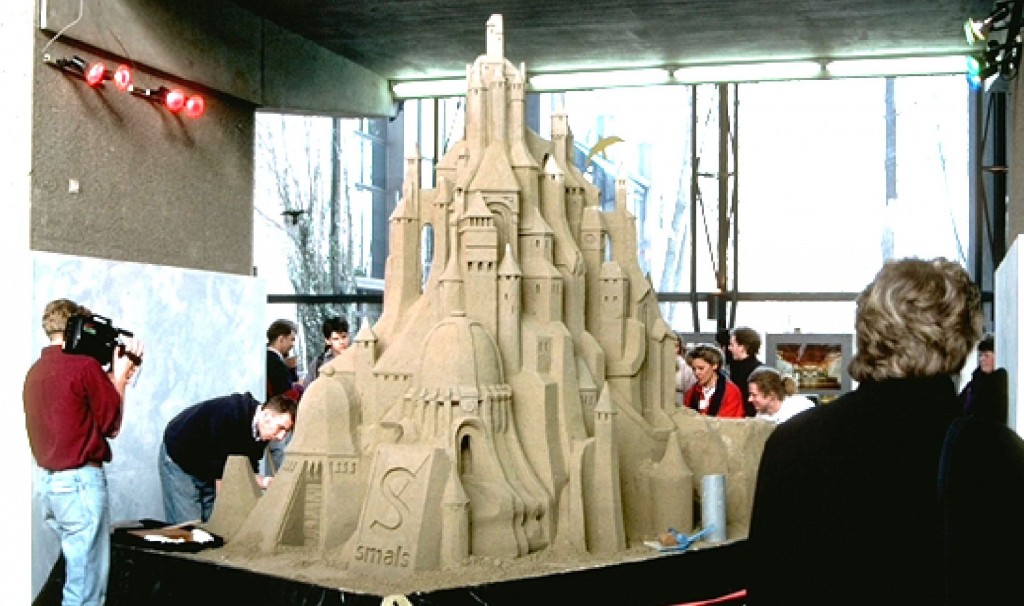 In 1991 the first sand sculpture beach event in Scheveningen, The Netherlands, was held. The starting point of the whole development of sand sculpting in Europe. During that time Marcel developed a strategic long term plan, based on his marketing and organisational expertise, to further develop sand sculpture into full scale profitable events. He also started to develop the concept of using sand sculpture as a medium for team-building and corporate training programs. This concept has been institutionalised in the Zandacademie (Sand Academy), now based in The Hague in The Netherlands. Nowadays, further corporate teamtraining schemes as well as training of local artists are embedded into additional educational programs during the realisation of large public events around the world. 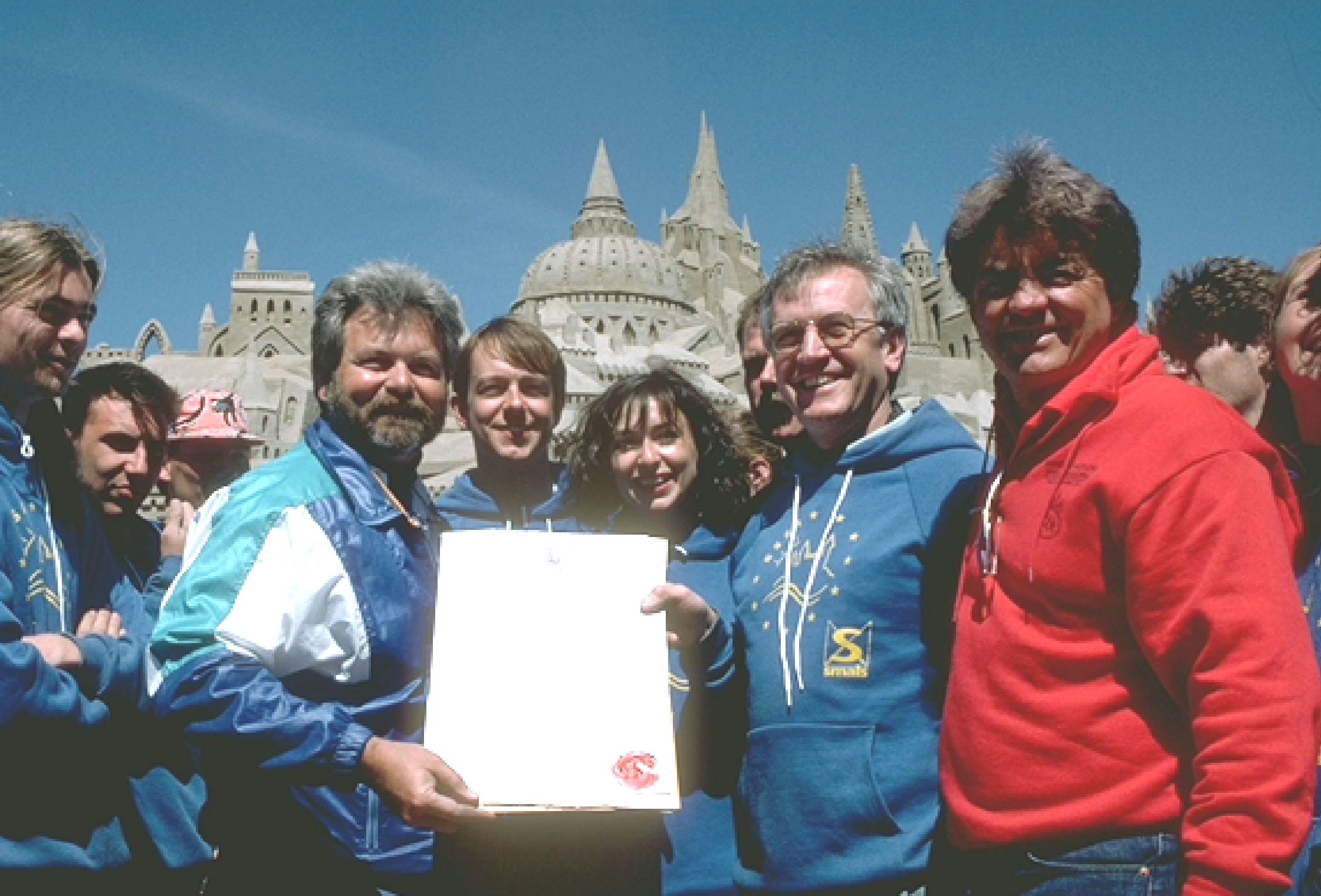 The Netherlands joins the WSSA – 1991 – Scheveningen beach, The Hague 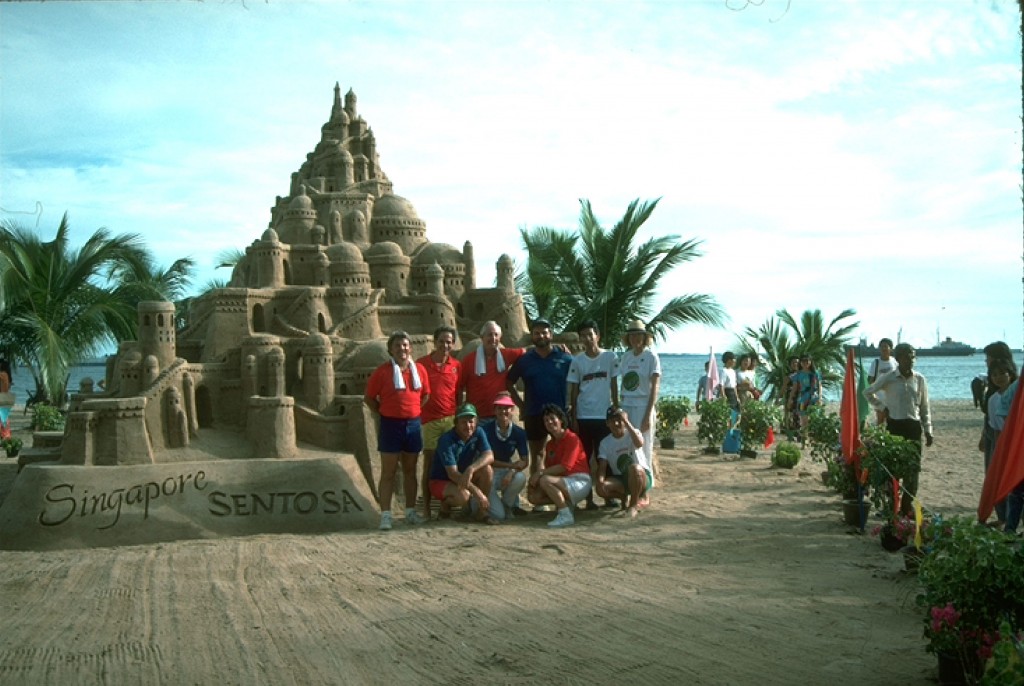 Gerry and his international team of sand sculptors

Sand sculpting in Japan was booming. The Japanese sand sculptors became very good at the art and nowadays there are many of them all over Japan. In 1994 the artist Katsu was invited by Gerry and he was the first Japanese sculptor to enter an international competition outside Japan. During this period Gerry found out that WSSA had become an excellent international platform. He was able to bring the art of sand sculpting internationally onto a higher level. It attracted the best sand sculptors and it could offer support to local event organisers.

In 1998 local organisations from China and Singapore contacted WSSA and asked to sell the idea of organising annual sand sculpting events. More and more sand sculptors were eager to work with WSSA because of the job security and highly visible events all over the world.

In China, more events, organised by the local event organiser CISS, took place every year and the number of Chinese sculptors grew rapidly. More and more countries in Asia, like Thailand, Taiwan, Singapore, Indonesia and Malaysia, expressed an interest in sand sculpting events.

Because of the great successes and to ensure continuity in growth of high quality events Gerry Kirk proposed a merger in 2004 between the organisation of the World Sand Sculpting Association and the Sand Academy in Holland. The World Sand Sculpting Academy was born, moved to The Hague, The Netherlands and Marcel Elsjan of Wipper became CEO of WSSA.

An extensive marketing strategy for WSSA was being implemented over the last 11 years and now WSSA is recognised as the knowledge centre and facilitator worldwide in every aspect of sand sculpting, active on all continents and represented in 16 countries.Through technical improvement, knowledge of sand and worldwide publicity, the World Sand Sculpting Academy developed sand art into a worldwide phenomena. The organisation has become a global network of sand sculpting experts and represents more than 25 years of excellence, experience and success. 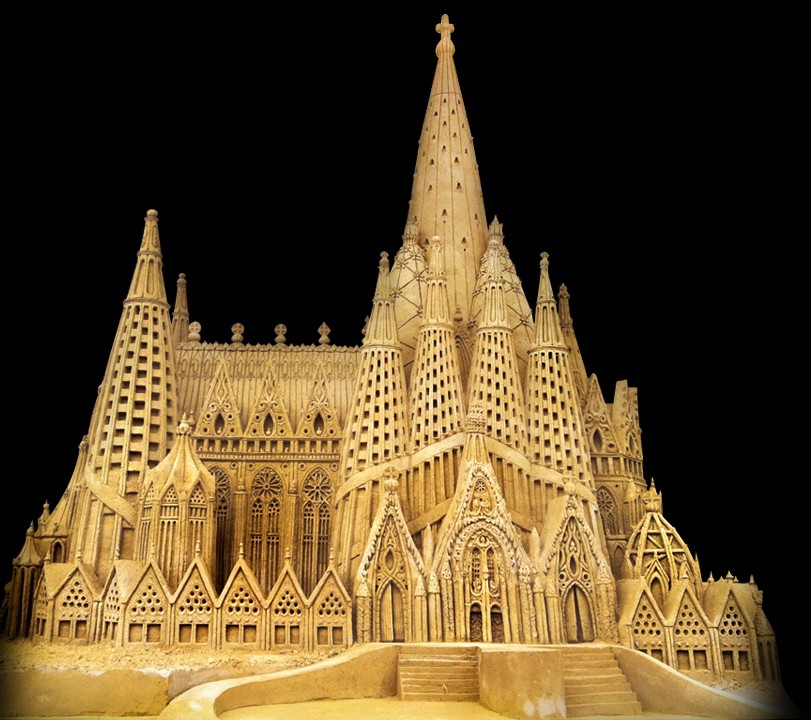 Sirtemastraat 339
2513 XM The Hague
The Netherlands